Fifty-six people aboard a flight departing Belfast, Northern Ireland escaped serious injury over the weekend after the nose landing gear on their airplane failed to descend and the pilot was forced to land at Belfast International Airport (BFS) without it.

The pilot of the Flybe airline Bombardier Dash 8 Q400 was hailed a hero after landing the airplane as smoothly as possible on the plane’s nose and skidding for several hundred yards on the tarmac. The ground crew, which included awaiting fire and emergency medical first responders, was also praised by Belfast International Airport Operations Director Alan Whiteside for responding "extremely smoothly." 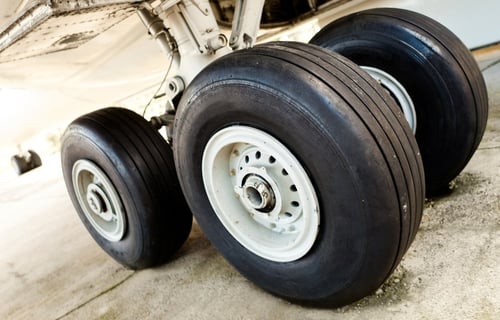 "There were a significant number of units because of the serious potential nature of the incident, so they were all on site by the time the aircraft was landing and it all went very smoothly thankfully," Whiteside told The Sun newspaper. Airport emergency response personnel used the Noggin OCA incident management platform to deploy emergency responders.

The only injury reported to the 52 passengers (including one infant) and four crew members was a sprained thumb. The pilot declared an emergency on-board soon after taking off from Belfast en-route to Inverness, Scotland. After the nose landing gear became locked in the raised position, the plane never left Northern Ireland airspace. The pilot circled for two hours to burn fuel, during which time the crew tried to fix the problem and lower the landing gear. When that did not work, the pilot came in for the emergency landing.

"The flight deck crew were superb, they landed on the main undercarriage, they held the nose of the aircraft up to the last possible moment, bleeding off all the air speed and still keeping control and just dropping it at the very last minute,” Whiteside told The Sun.

Because of the smooth landing, the plane stopped quickly and there were no reports of fire on-board. Emergency crews were waiting and quickly responded by evacuating the passengers and crew members.

The Air Accidents Investigation Branch (AAIB) will investigate the cause of the gear failure. According to Boeing, there were 14 incidents worldwide in 2016 that involved a commercial jet’s landing gear malfunctioning.

Belfast International Airport, the 10th busiest airport in the U.K., uses the Noggin OCA incident management platform to manage all of its operational and emergency events, from responding to incidents like the one last weekend to weather monitoring and a range of audits across the airport. With Noggin, Belfast International Airport administrators have been able to better follow developing situations, streamline communications, consolidate all data into one central repository and capture data in a way that improves analysis and insight.

Learn more about how Noggin is used to manage operational and emergency incidents at Belfast International Airport in this video presentation by Kevin Napier, the airport’s Compliance Manager:

Noggin is the next-generation, cloud-based operational incident management platform for airports. To learn more about Noggin's solutions for airports, contact us at sales@noggin.io