How much did corporate reputations slump during the financial crisis? A lot, at least according to industry actors at the time. For instance, when polled in 2009, 85 percent of executives agreed that the public’s trust in business had diminished. 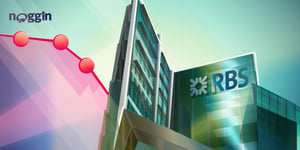 The most important factor they cited for the precipitous decline was financial firms’ misunderstanding of risk and its potential effects on the real economy. The second largest driver: job losses. In other words, businesses who pruned their workforces in order to stay financially afloat suffered (further) reputational blowback for laying off workers during a crisis period.

And that blowback was severe. Public trust is consumer trust, after all; and the latter tends to correlate positively with sales, profits, business viability, in short. Add to that, a lack of consumer trust usually foreshadows greater regulatory oversight, at the same time that it limits an individual firm’s ability to weigh in on the macro- and microeconomic decisions that will impact its bottom line.

Lucky then for business, that corporate reputations have rebounded fully in the ten years since the collapse of Lehman Brothers? Not by a longshot.

Just ask the Royal Bank of Scotland (RBS). RBS entered 2008 as the world’s largest bank with a whopping $3.77 trillion in assets. It had reached the top spot by swallowing up Dutch bank ABN AMRO the year prior.

By March 2008, the effects of that acquisition had become clear, as RBS announced a £12 billion cash call to try to shore up its financial position. It didn’t work. A month before Lehman Brothers failed, RBS reported its first loss in four decades. And by the month after the Lehman crash, RBS had already been bailed out by the U.K. government to the tune of £45.5 billion. Its then-CEO Fred Goodwin was out as the top guy.

The reputational crisis, however, would follow him. In 2009, RBS investors turned on the retired Goodwin, dubbed “Fred the Shred”. He’d eventually be shamed into relinquishing over £200,000 a year of his pension.

He wasn’t the only person in the cross-hairs of the crisis. An official report into the company’s collapse implicated “underlying deficiencies in RBS management, governance and culture which made it prone to make poor decisions”.

Years later and things haven’t gotten much better. IT failures in 2012 left RBS customers unable to access their accounts for days. RBS was also implicated in the Libor scandal and had to pay £390 million for misconduct. And just this year, British regulators released their full, unredacted account of RBS’s “widespread inappropriate treatment” of 12,000 small businesses between the years 2008 and 2013.

With that track record, it’s no surprise, then, that now-CEO Ross McEwan believes it will take another decade to restore the bank’s reputation fully. Independent analysts concur: “One of the biggest losers [of the crisis] is the RBS brand,” says James Daley, of consumer site Fairer Finance. “It has sunk to the bottom of [our] customer satisfaction tables over the past few years.”

Reputation is an extinction-level risk to your business

Of course, not every crisis will take as long to recover from as RBS’s. But because of the financial crisis, every corporate reputational crisis-even the ones perpetuated by non-financial companies-will be viewed by a more skeptical, dare I say hostile, public. Trust in institutions, including business, remains low, according to the 2018 Edelman Trust Barometer. And though CEO credibility, specifically, has crept up from a nadir, it continues to remain much lower than that of employees or experts.

In other words, reputational crisis, more than ever, poses an existential risk to your organization. That’s because reputation is an important contributor to the value of your business.

How important? One study found that reputations alone accounted for 26 percent of the total market capitalization of the Standard and Poor’s 500. For huge brands like Apple, McDonald’s, IBM, and Caterpillar, reputation accounts for more than half of total market value.

Customers also don’t keep quiet about corporate crises once they learn about them. More than a third (36 percent) of global consumers report discussing corporate scandals or wrongdoings with others.

And a bad reputation tends to linger, as we’ve seen with the case of RBS, radically altering consumers’ perceptions about all the brands and products that a parent company sells. According to survey data, when consumers discover a product they like was made by a parent company they don’t, 39 percent of them stop buying the product, and 28 percent feel more negatively about the product.

Now that the financial crisis has poisoned the reputational well for business, the question that remains is are organizations prepared. A Deloitte survey says no. Roughly half of responding enterprises admit not having tools to detect, monitor, and analyze reputation risks. What’s more, 59 percent of CEOs and board members have no plan in place to develop or acquire tools to address reputation risks.

That creates a significant gap between what executives need to be doing to do protect business value and what’s actually happening on the ground. To help close the gap, we’ve put together a useful guide to help you get started with corporate reputation management. Download Managing Corporate Reputation: What senior executives need to know now.