The Stages of Crisis: Understanding the Crisis Management Lifecycle

Crisis can just as easily arise from a single devastating event, as it can from a series of unattended critical events. But either way it happens, crisis can present a serious threat to a business’s core objectives, reputation – even its viability. What’s more, crisis, once underway, doesn’t just burn bright, then suddenly extinguish. That’s because crisis is by definition multilayered and multidimensional. In order to properly prepare for, manage, and recover from crisis, companies need a strong crisis management function, one that anticipates crisis. So what’s the key – continuously improving your crisis management planning and preparedness through a crisis lifecycle management approach. Let’s dive in.

A concept familiar to marketers from the product lifecycle, the crisis management lifecycle starts with a few basic stages. The idea being that if you correctly identify each stage, you’ll be better equipped to make decisions appropriate to that stage, with the end goal of recovering efficiently from crisis. 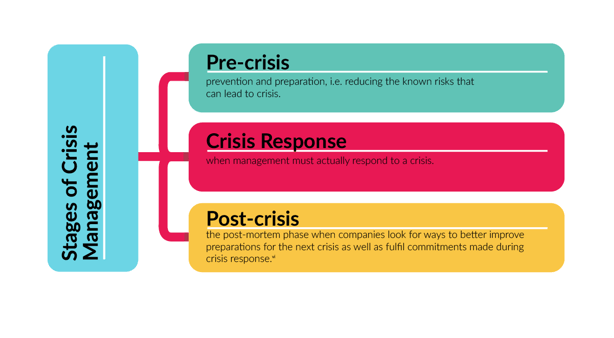 The Stages of Crisis Management

The basic stages of crisis are as follows:

For more great content from Noggin, visit our Resources Center.

Why Companies Aren't Prepared for Crisis