After the Christchurch Shootings: A resource for protecting houses of worship

By now, we know the grizzly details of the March 15 terror attacks at the Al Noor Mosque and Linwood Islamic Centre in Christchurch, the deadliest mass shooting incident in New Zealand history. All told, fifty people were killed, and scores injured at the hands of a self-described white supremacist.

As many have noted, gun violence is relatively rare in New Zealand. The threat of terror strikes is also low. And incidents of this kind, i.e. public mass shootings, are virtually unheard of: the country’s most recent mass shooting incident was in 1997. 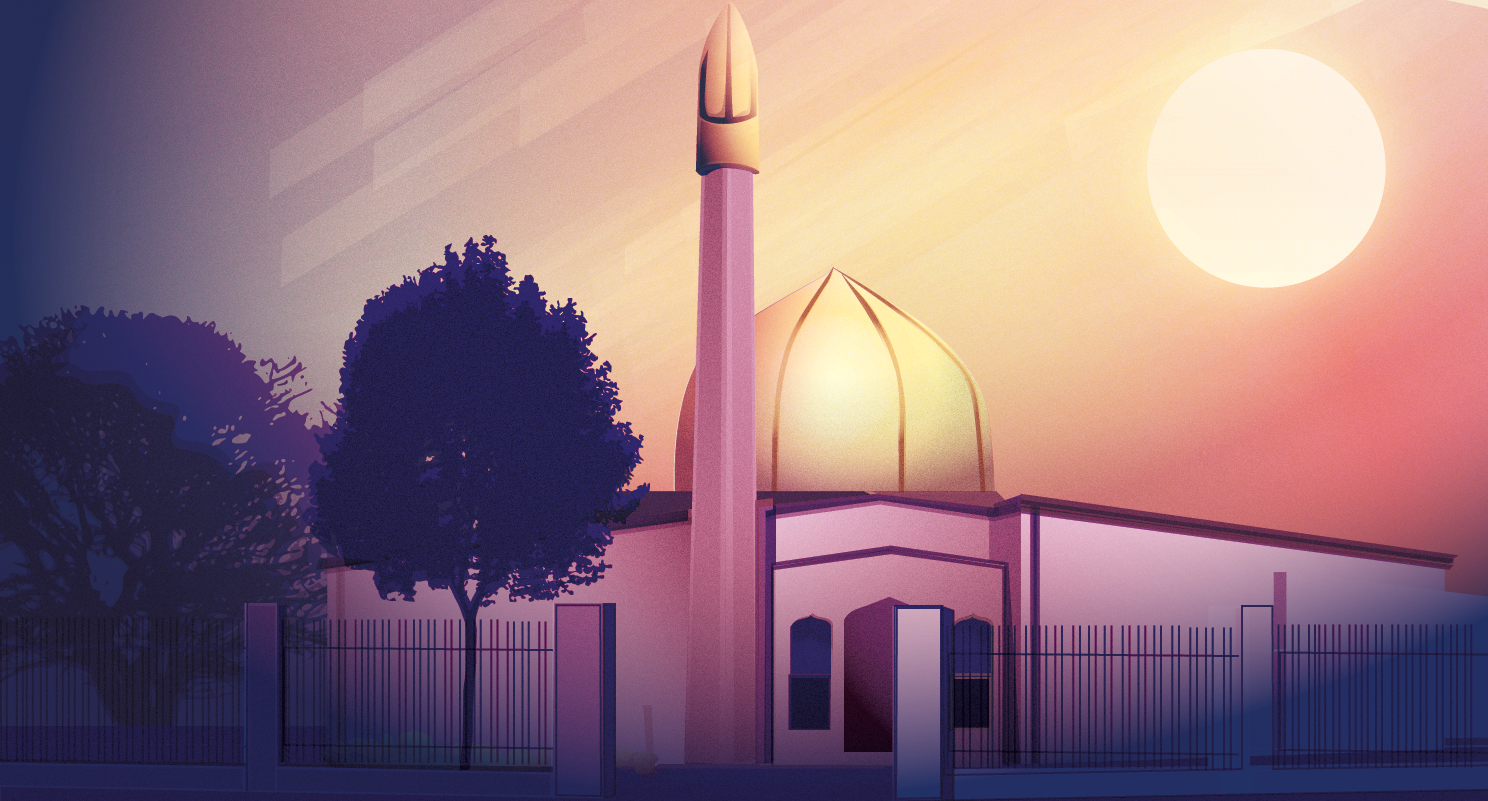 In this respect, New Zealand is more the norm than the exception. Outside of a small cluster of countries, public mass shootings are actually uncommon. According to a cross-national study of public mass shooting incidents between 1966 and 2012, only five countries experienced more than ten public mass shootings, with the U.S. far outpacing the other four. In fact, the U.S. led with 31 percent of all global offenders: 91 in total. For comparison, the Philippines came in a distant second with 18.

Still, the Christchurch attacks show that we simply can’t rule out high-profile active shooter incidents, even if they are a statistical rarity in our city, region, or country. And since public shootings, by their nature, are meant to inflict maximal damage in a short period of time, we must all be prepared to react quickly to limit damage and save lives.

Here, looking to past events proves the best guide for orienting our efforts going forward. And one troubling trend confirmed by the Christchurch mosque shootings is the specific appeal of houses of worship to adversaries. Indeed, the March 15 attacks follow a long succession of active shooting incidents perpetrated in houses of worship. Just in the last half decade, we’ve witnessed the Pittsburgh synagogue shootings at the Tree of Life (October 2018), the Sutherland Springs church shooting (November 2017), the Burnette Chapel shooting (September 2017), Islamic Center of Quebec City shooting (January 2017), the Emanuel African Methodist Episcopal Church shooting in Charleston (June 2015), and the Kansas City shootings at two Jewish centers (April 2014).

Why these venues, in particular? Experts, like those at the U.S. Federal Emergency Management Agency, suspect that houses of worship provide “attractive targets where [adversaries] can inflict mass casualties, cause substantial psychological impacts, and draw extensive media coverage.” So, for houses of worship, in particular, preparation is key.

To achieve it, houses of worship should consult the wide welter of information from the public and private sectors on combatting the active shooter threat. Though all situations are different, a general best practice is to put flexible protocols in place, proceeding methodically through the following steps:

As the list suggests, there are steps to take before putting pen to paper on your active shooter response plan. For one, it’s critical to consider the plan’s purpose and scope. What is your organization hoping to accomplish with the plan? What material will the plan cover? Be as clear as possible in distilling your points.

Remember that goals and objectives vary depending on factors like your existing security posture, your venue location (or site), available resources, and coordination with responder agencies. Here are some helpful factors to consider, courtesy of the U.S. Department of Homeland Security, when determining goals and objectives: 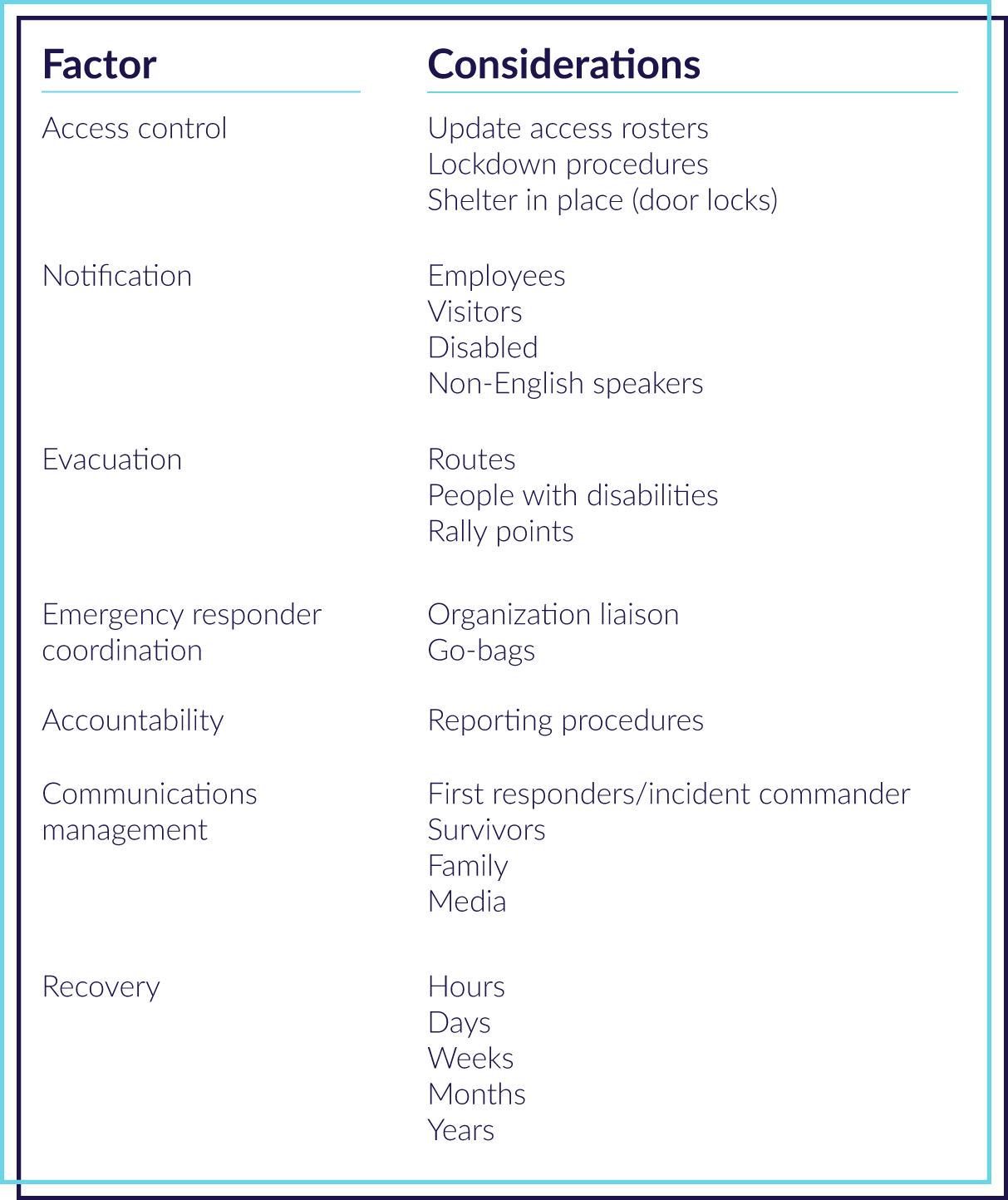 Finally, the plan, once drafted, should provide information on how to respond to an active shooter incident, outlining roles, responsibilities, and duties, both for your organization’s representatives as well as for the outside agencies who will be involved in managing the incident. Further points the plan should cover: